How girls are saving girls from traffickers in the Sundarbans 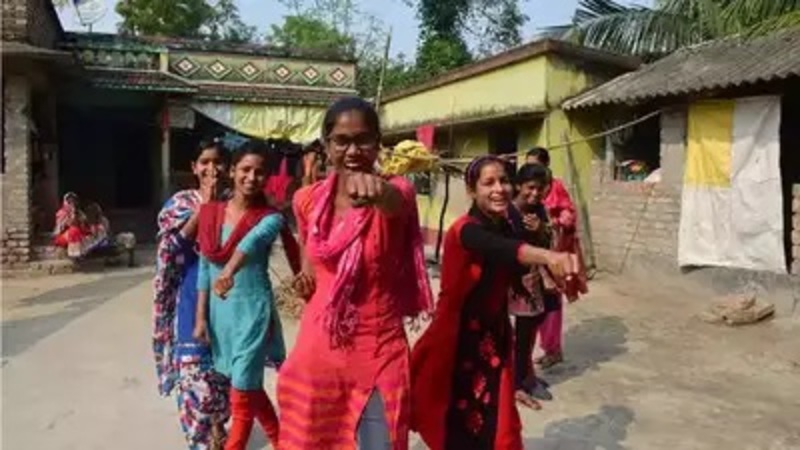 Photo by N/A is licensed under Times of India Times of India
Teenaged groups keep an eye on unscrupulous agents who come with fake job offers or marriage proposals and alert authorities if there is a risk.
*Look out for girls who haven’t been seen in school or in the neighbourhood or our meetings for a few days.
*Pay attention to any girl showing signs of sadness, despair or sudden changes in behaviour like lack of interest in activities.
*Keep an eye on strangers in the village visiting a family with offers of job, money or marriage proposal.
*Alert the police or State Commission for Protection of Child Rights (SCPCR) if any of the above signal imminent risk or danger.
A group of teenaged girls give a quick rundown of how they keep vigil on other young girls of their own age in and around Basanti, an island in the Sundarbans area of Bengal where human trafficking is rife.
Even 17-year-old Rani* is acutely conscious of the reasons the world’s largest mangrove ecosystem is so vulnerable — recurring climate catastrophes, food scarcity, lack of employment opportunities. “Since we live in the farthest end of the Sundarbans, our parents depend on fishing and farming for a livelihood but cyclones and floods keep battering our villages and our family’s earnings.
With no food, no money, and sometimes no shelter when our huts get washed away both youngsters and parents are easily taken in by anyone who comes bearing the promise of a job or marriage proposal.” She adds that the traffickers deliberately target families that are very poor or very large.
It’s not every day that a teen saves another teen from being trafficked but Rani is one of the many adolescent girls who are now a part of 291 ‘Girl Power Groups’ spread across five trafficking-prone districts in West Bengal — North and South 24 Parganas, Kolkata, Darjeeling and Jalpaiguri — playing a critical role in shielding children in their community from being betrayed, abducted, or lured into early marriage, bonded labour or sex work.
If West Bengal tops the country with a whopping 44% share of the total cases related to human trafficking in India, according to NCRB’s 2016 data, Rani’s home in the South 24 Parganas accounts for 37% of the state’s numbers.
It was in this backdrop that the ‘Girl Power Groups’ were formed by World Vision India to sniff out possible traffickers and empower adolescent girls to create a safety ring around themselves and their peers. It’s been five years since these groups, comprising girls as young as 12 to 18, have taken up the fight, handling an average of 20 different cases every month.
Sandip Bhowmick, a technical specialist with World Vision’s anti-trafficking project, says they are given training first. “We teach them about forms and signs of trafficking that are often hidden in plain sight; how to lodge an FIR; and the helplines to call. If helplines and cops don’t respond in time, they’re taught how to write out an incident report and WhatsApp it to SCPCR who can initiate immediate action,” he explains.
But it wasn’t easy for the children turned activists. “Village elders and local politicians would say, ‘What do you know? Who are you to tell us?’ They wanted us to back off and so did our parents who thought we’d get into trouble but we never gave up. I told my parents, ‘What if something like this happened to me?’ They understand and support me now,” says Aditi*, 16.
The girls now have their own network of informers who sometimes tip them off about a potential trafficker or a child at risk of being married off, and maintain close coordination with the local police, panchayat and members of child protection committees. “In fact, now our fathers inform us if they get a whiff of something. It’s because they’re learning what trafficking really is,” says Aditi, recounting how traffickers came disguised as NGO workers during the pandemic offering ration kits and a job.
Their brief often extends to other forms of abuse. “Since we’re the same age and hang out with each other we sense when something isn’t right. Also, it’s easier for a girl to open up to us as friends,” says Rani, recounting an incident a few months ago when she noticed a 12-year-old in her village become aloof.
“Mala* suddenly went quiet and stopped playing with us. Some of us sat her down for a chat and realised that she’d been sexually abused by her brother-in-law. We called Childline immediately and informed the police,” says Rani.
In the last five years — the girls who go by the name ‘joddha’ in the village meaning ‘warrior’ in Bengali — have filed 102 sexual abuse cases, stopped 334 child marriages, and prevented 29 children from being trafficked. The girls also help trafficking survivors overcome a hostile environment after rescue, rejoin their community and not drop out of school.
Aditi is proud of two trafficking attempts she thwarted in her village a day before her board exams. “I stopped a 16-year-old girl from eloping with a boy she hardly knew and a 13-year-old from getting married off. It gave me confidence.”
Source: Times of India
Photo by N/A is licensed under Times of India Times of India