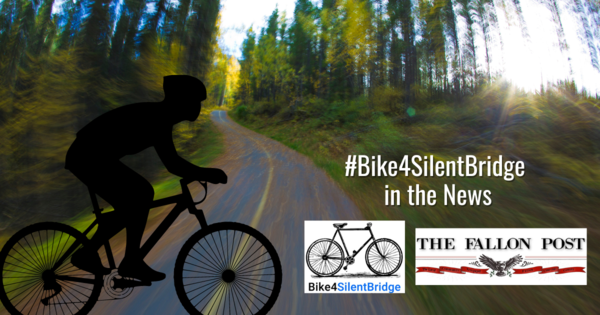 “I met with a man on a quest. James is a 62-year-old who has taken on the challenge of riding his bicycle across the United States. He started in Blaine, Washington, near the northwest corner of the county, and he’s heading to the southernmost corner, Key West, Florida.

“He hit Fallon last week, after completing the first leg of his journey, riding the Pacific Coast Trail to San Francisco. After crossing over the Golden Gate Bridge on Day 25, James set out on the Western Express Trail, up from the Bay over Tahoe where he crossed over into Nevada.

“Riding along desolate U.S. Highway 50, I had the chance to meet this lone cyclist on Day 35, on his way to Pueblo, Colorado. But this isn’t a story about a guy riding his bike across the county. The ride is much more symbolic and serious.

“James is riding to bring awareness to the issue of Human Trafficking. As he explains, this ride is a mission, a crusade to make people aware of human trafficking and the organizations that work so hard to rescue the victims and tell the stories of suffering. James is a supporter of an organization called Silent Bridge. He has been an advocate and supporter of Silent Bridge, an international nonprofit out of Vancouver, WA for many years. He is passionate about fighting human trafficking, not just in the United States but worldwide…”

Read the rest of the article on the Fallon Post’s website.