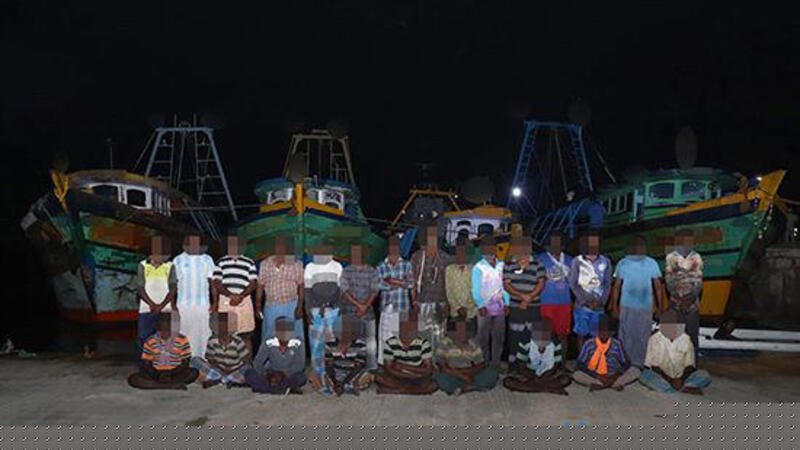 Aspecial operation by the Sri Lankan Navy and the coast guard has led to the seizure of five Indian fishing trawlers and 24 Indian fishermen being taken into custody, by the neighbouring island nation. The Sri Lankan Navy says that they carried out a special operation in their northern waters to chase away Indian "poaching trawlers" on Monday evening. The seized trawlers and the 24 Indian fishermen were taken to the Kankesanthurai Harbour and are to be handed over to the Mailadi Fisheries Inspector for further legal proceedings.

According to the Lankan Navy, they deployed craft of the fourth Fast Attack Flotilla and the Sri Lanka Coast Guard attached to the Northern Naval Command, to chase away a cluster of Indian poaching trawlers in Sri Lanka’s waters, off the Kovilan Lighthouse, Kareinagar, Jaffna. "The operation led to the seizure of five Indian poaching trawlers continued to remain in island’s waters, with 24 Indian fishers and their fishing gear," they said. The Lankan Navy maintains that illegal fishing practices of foreign fishermen in Sri Lanka’s waters deal a blow to the livelihood of local fishermen as well as the marine ecosystem.

Including the recent apprehension, the Lankan Navy said they seized 35 Indian poaching trawlers and 252 Indian fishermen during operations conducted thus far in the year 2022 and handed them over to the authorities for onward legal action.

Recently, the 32nd International Maritime Boundary Line(IMBL) meeting between India and Sri Lanka witnessed the discussion of Maritime Security and the safety of Indian fishermen in the Palk Strait. The Palk Strait is a narrow strip of sea that connects Southern India with Sri Lanka.

At the meeting, the Indian delegation urged the Sri Lankan security agencies to show a more humane approach towards the Indian fishermen. Both delegations reiterated the need for expeditious information sharing, especially on issues that require immediate action.

Given the proximate nature of the southern Tamil Nadu coast and the Northern Sri Lankan coast, there are differences in the perception of the International maritime boundary. There are cases of narcotics smuggling that take place in the region, illegal human trafficking from Sri Lanka to India's Tamil Nadu is often witnessed and there are cases of Indian fishermen being apprehended in Lankan waters, attacks on Indian boats and fishers by Lankan authorities.

Source: Wion
Photo by Wion is licensed under Wion N/A