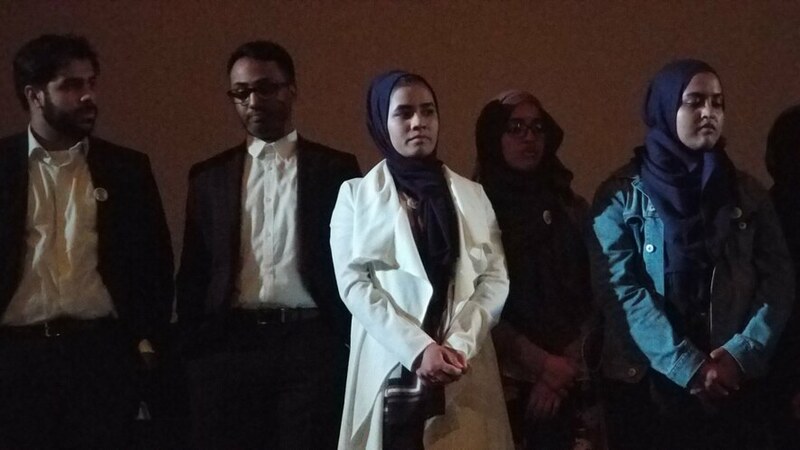 I Am Rohingya - Cast & Crew - Q & A by m.gifford is licensed under creative commons CC BY-NC 2.0
Background:

In the last several years, the Rohingya—a Muslim minority in Myanmar—have experienced staggering persecution and violence. The grave issues they face are due to Myanmar’s policies that refuse to recognize them as one of 135 different ethnic groups that make up the Buddhist majority nation. Under Myanmar’s laws, the Rohingya have been denied full citizenship since 1982. As a result, they are stateless, not afforded basic human rights or access to things like health care and education.

In August of 2017, a militant group of Rohingya—the Arakan Rohingya Salvation Army—hit an estimated thirty security outposts, killing twelve. The attack didn’t lead to a proportionate response. Instead, Myanmar’s military struck the Rohingya population in general, killing thousands, according to Amnesty International. The campaign of atrocities prompted a mass migration to Bangladesh, a Muslim majority nation, which shares a border with Myanmar. In fact, an estimated 730,000 Rohingya ended up fleeing to Bangladesh. The massive influx would soon create the largest refugee settlement in the world.

Being targeted by human traffickers:

Besides being unwanted in Myanmar, the Rohingya face a whole host of other problems in Bangladesh. One report detailed how traffickers are promising the Rohingya opportunities in the country, only to sell them into forced labor. A victim who managed to escape her captors by stealing a house key while they were sleeping, told Reuters that, “They didn't even give me fresh food and I was always locked inside.”

In May of 2019, a reported 23 girls, aged 15–19, were freed by the Dhaka Police, the largest law enforcement body in the country, in a raid operation. The girls were preyed on by traffickers at the refugee settlement and told that they would be given jobs in Malaysia.

For those living in the refugee settlement, child trafficking remains a chief concern.

"I knew what was going to happen to me. The woman who offered me a job, everyone knows she makes people have sex. She is a Rohingya here for a long time, we know her. But I didn't have a choice. There is nothing for me here. My family have disappeared. I have no money. I was raped in Myanmar. I used to play in the forest with my brother and sister. Now I don't remember how to play,” a fourteen-year-old survivor told the BBC.

At the present time, Myanmar’s government is not just neglecting the issue, but making it worse for the Rohingya.
In 2017, Marzuki Darusman, an Indonesian lawyer and former attorney general of Indonesia, was appointed chairman of the UN Independent International Fact-Finding Mission on Myanmar by the United Nations Human Rights Council. He believes that Myanmar is failing to live up to its obligations under the Genocide Convention. On October 23rd of 2019, the United Nations reported that Darusman told the General Assembly that Myanmar is failing to prevent, to investigate, and to enact effective legislation criminalizing and punishing genocide.

The Rohingya in the refugee camps are living in huts made of plastic sheets and bamboo. The camps are overcrowded. They lack adequate access to neonatal care, clean water, and sanitation. Such conditions provide a vehicle for communicable and waterborne diseases to spread.

While Bangladesh has allowed hundreds of thousands of Rohingya to resettle, it isn’t offering any other opportunities. It continues to be illegal for the Rohingya to hold jobs in Bangladesh or travel outside of their refugee settlement. The very few who do have jobs put themselves at great risk or may end up being shortchanged on their work.

In September of 2019, Rohingya refugees also lost access to the 3G and 4G internet speeds, which also impacts humanitarian efforts within the camps.

Back home, many of the Rohingya’s villages have been bulldozed or destroyed. Myanmar refuses to acknowledge its list of human rights violations, saying that its operations have been focused of countering terrorism in the region.

Displaced and oppressed, the Rohingya continue to face one crisis after another. They hope the world pays attention to their plight and doesn’t ignore their voice. Above all, they want to return home, be accepted as equals, and live full lives without the fear of conflict or persecution.
I Am Rohingya - Cast & Crew - Q & A by m.gifford is licensed under creative commons CC BY-NC 2.0