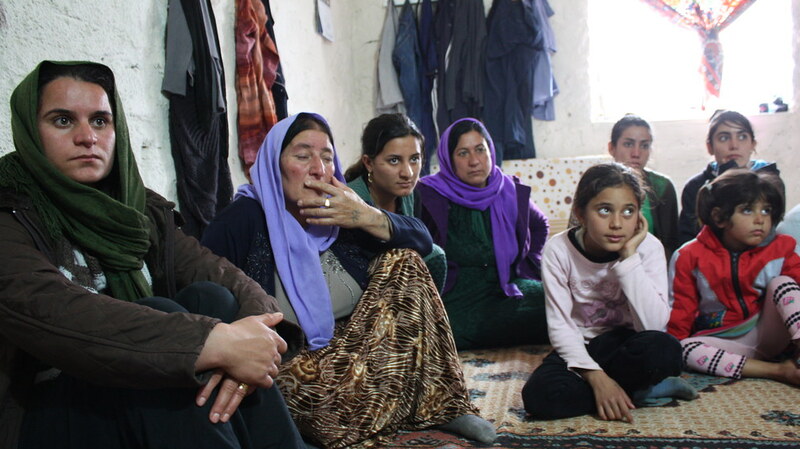 IMG_0466 by EU Civil Protection and Humanitarian Aid Operation is licensed under creative commons CC BY-NC-ND 2.0
Background:
In August of 2014, the Yazidi, a religious minority in Iraq, were systematically targeted by ISIS in the Sinjar region of Iraq. Believed to be “infidels” and “devil worshippers,” they were not only murdered and massacred in a 21st-century ethnic cleansing campaign, but thousands of Yazidi girls and women were kidnapped and sold into sex slavery.

Under the Islamic State, Yazidi women and girls were robbed of their rights, dignity, and innocence. In the eyes of ISIS, they were property, not people, to be sold and traded in a repeat cycle of dehumanization.

Yazidi women were also told by their ISIS captors to convert to their version of Islam or be killed. "They tortured us, tried to forcefully convert us. If we refused, we were beaten, chained outdoors in the sun, forced to drink water with dead mice in it. Sometimes they threatened to torture us with electricity,” said Jinan, an eighteen-year-old survivor.

However, converting didn’t mean they were going to be treated as equals. Instead, they were routinely broken psychologically, assaulted, and raped.

Leyla Talo, a Yazidi mother, said she was sold eight times during her period as an ISIS sex slave. “There was a hall where they would put all the Yazidi women. They would dress us in dirty clothes. And many men of different nationalities would come. Every man would pick a woman and take her,” she recalled.

Nadia Murad, also a Yazidi, and Nobel Piece Prize winner, was an ISIS sex slave for three months. “The slave market opened at night,” she wrote.

She then painted a vivid picture of what happened when the first ISIS fighter entered the room, “We moaned as though wounded, doubling over and vomiting on the floor, but none of it stopped the militants. They paced around the room, staring at us, while we screamed and begged. They gravitated toward the most beautiful girls first, asking, ‘How old are you?’ and examining their hair and mouths. ‘They are virgins, right?’”

In another account, a fifteen-year-old Yazidi girl said that she was raped along with two others on the same night. “He took us to his house and he forced us to have sex with him. He raped us together, we were together the three of us for the night.”
ISIS continued operating its sex slave market until suffering heavy defeats in Iraq and Syria in 2017.

Escaping ISIS:
Some of the Yazidi girls and women who fled and escaped ISIS no longer had a home. The destruction in Sinjar wasn’t limited to murder. ISIS made sure to kill off any chance many Yazidis had at a livelihood, too, destroying their orchards, sabotaging their wells and farming equipment. Yazda, an organization which focuses on advocating for the Yazidis, reported that many of them also had their homes destroyed and looted.

As a result, many Yazidi women and girls were displaced and relocated to refugee camps in the Kurdish region of Iraq, primarily Duhok. Though, some were able to return to Sinjar.

Currently:
Despite ISIS no longer holding territory in Iraq and Syria, the Yazidi women and girls who were victims of the Islamic State’s sex slavery continue to face their own battles head on—severe post-traumatic stress, the issue of displacement, social stigma, the loss of family and friends, and many other mental and physical injuries.

An October 4, 2019 report from Doctors Without Borders details just how severe and challenging things have become in Sinjar. “Those who remain in Sinjar district experience a high level of mental health needs. Between April and August 2019, 24 patients arrived in the emergency room of Sinuni General Hospital following suicide attempts—six of whom died. Eleven of the patients were under 18 years old,” the report states. And the UN documented 40 suicide attempts within the Dohuk Governate in 2018.

As of 2019, the Office of Yazidi Abductees Affairs in Duhok, Iraq, reports that 2,966 Yazidis remain missing, 1,360 of those being women.

An estimated 7,000 Yazidi women and girls were victims of ISIS sex slavery. Many may be free from ISIS today, but the scars of their captivity remain. And they continue to need assistance, humanitarian aid, and support. Their fight is far from over.
IMG_0466 by EU Civil Protection and Humanitarian Aid Operation is licensed under creative commons CC BY-NC-ND 2.0